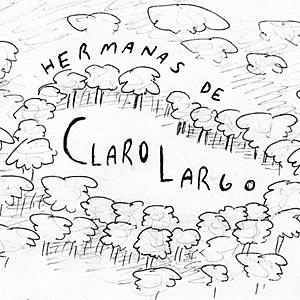 “Sisters of Claro Largo” might best be described as an allegory, a parable of two sisters–one retiring and contemplative, the other active and charismatic–as they come into conflict over the influx of drugs into their community.

Claro Largo is described as a community formed by exiles and refugees from an unnamed authoritarian city. Belona, the retiring “Mary” of the pair, is a strange, troubled character who seems to have been seeking after a spiritual truth ever since she was a child; Alma, the active “Martha”, is a leader who eventually forms what is essentially a local militia, and takes charge of protecting (or controlling?) the community. Parallels might be drawn between the girls’ situation and the history of the authoritarian city. It seems almost certain that the two sisters are representative of larger causes and factions: church vs. state, perhaps; or spiritual freedom vs. earthly control.

Gameplay is presented in the form of hyperlink words that add sentences to the displayed text, expanding the story. In some ways, this feels very much like a case of “click to continue”, and I was unimpressed. On a second playthrough, I did find that not every link needed to be clicked and expanded in order to continue to the next chapter. I rather suspect that the idea is to form differently nuanced stories by what is or is not revealed. The final chapter does this in reverse, by displaying the whole chapter and allowing you to cut away pieces of it by clicking the relevant hyperlinks. Occasionally, this can change the whole meaning of a paragraph: for example, you can reassociate a pronoun with the other sister by simply excising mention of one sister, thus changing the fates of those involved. But I think this is only an incidental exercise for the grammar-nerd reader. As far as the game is concerned, the ending it shows you is the canonical ending for this iteration of the story, and the system of cutting text away is only an artistic way of condensing a full chapter down to a single thought.

There is more than one ending, by the way. I was surprised. I’m not sure how it comes about, or if it happens at random, but the story can end with either sister triumphing over the other. Perhaps it is something to do with which sentences have been revealed in the preceding chapters; but so much of that is done that the workings of the mechanism are completely lost. It feels uncontrolled, and as such, it might as well be random. If there are any other endings–reconciliation or continued antagonism, for instance–I have no idea how they might be achieved.

Anyway, as I said, there’s very much a sense of this being an allegory, that the people and situations are meant to be stand-ins for something far greater. The story itself feels a bit wistful and detached, almost sentimental and kind of sweet, in a way. Like Risalamande–Danish rice pudding–it can be a bit grainy, and if you’re lucky, you might find a whole almond in your next spoonful; but whether you do or not seems to be a matter of chance.

Like Loading...
This entry was posted in Reviews and Recommendations and tagged Interactive Fiction, Spring Thing 2016. Bookmark the permalink.