A new year and a new beginning

Posted on January 2, 2017 by Christopher Huang

Well, I’ve made the top three on The List, which essentially means that I get the prize of the Full Publication deal without having to worry about hitting the full 750. The contest ended on the 30th–or maybe it was the 31st. Things are a little hazy there, but luckily the race wasn’t so close that it would have made much of a difference.

Much gratitude is owed to all the people who have pre-ordered. And now, on to the production phase! When will the books come out?

I’ve been saying that books will probably be out around November 2017, and that was a conservative estimate back in March when I started. But the volume of books going through Inkshares of late means that the production process is longer now than it used to be. Here is what Inkshares has to say about the production process. According to this, it could be twelve to eighteen months from the moment I submit my manuscript before the book comes out. In short: between January and June 2018.

I admit to being just a little dismayed. But it’s still miles better than not getting it out at all, so it’s still a cause for celebration and I’m going to party like it’s 1925.

I expect to receive the questionnaires about how to handle this property very shortly. Everything’s ready for this next step. The manuscript is done, and I’ve got a new and improved floor plan for the Club: 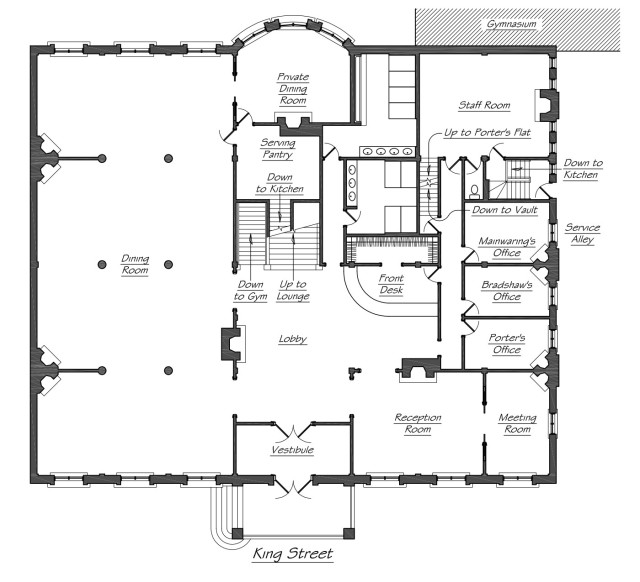 It’s all systems go from here on. A great way to start a new year.

The Arthurian link in MatVC

Posted on December 18, 2016 by Christopher Huang

It is now one week to Christmas, and a bit under two weeks to the end of The List. On the 30th, we shall see how our pre-order volume measures up against everyone else’s–I’m expecting a bit of jump in everybody else’s pre-order volume over the Christmas holidays as they meet up with distant relatives they haven’t spoken to all year, so nothing is for certain just yet. Anything can happen.

Competing in The List … well, that puts one in mind of a certain sport, doesn’t it?

Except the jousting in this List is done with pages. (And did you know that the official state sport of Maryland is jousting?)

Eric Peterkin, the hero of “Murder at the Veterans’ Club”, doesn’t joust, but he does have dreams of Arthurian chivalry. The novel compares him to Sir Pellinore, one of King Arthur’s knights of the round table: according to legend, Sir Pellinore’s primary hobby was the pursuit of the mythical Questing Beast, a creature with the head of a snake, the body of a leopard, the feet of a deer, and a constant sound in its belly described as like “thirty brace of hounds a’questing”–hence its name. (Apparently the verb “to quest” once meant “to bark”. Think of that the next time you read of heroes gone a’questing.)

The comparison is rooted in Eric’s Quixotic need to go chasing after something–anything!–and, in the novel, his “Questing Beast” is the identity of the murderer. Just as Sir Pellinore isn’t happy unless he’s out chasing his Beast, Eric won’t be happy unless he’s doing the same. Not that he’d ever admit it, of course….

Posted on November 20, 2016 by Christopher Huang

“Murder at the Veterans’ Club” has been selected for The List. This is a contest for book projects on Inkshares that have caught the eye of the Powers That Be–unlike other contests, participation is by invitation only. On 31 December, the three book projects with the most unique readers will win the Full Publication deal … you know, that thing that normally only happens when you get 750 orders.

WHAT DOES THIS MEAN?

It means that on 31 December, if “Murder at the Veterans’ Club” is still in the top three–it’s currently in second position–it can go into production with the Full Publication deal right then and there. It means people could get their books a month earlier than expected. It means the current focus is no longer on the great 750, but on maintaining a position at the top of the heap.

It means that people think “Murder at the Veterans’ Club” is a book worthy of note, in case anyone had any doubts before.

But wait! Starting out in second place is nice and all, but does that mean I can sit back and relax and just wait for this to fall into my lap? NO! A handful of the competition is starting from zero, which means they are blank slates with unknown potential; the first few weeks of any campaign always see a spike of orders, and these young turks are fresh and full of beans. Any one of them could pole-vault into first position and force me back, and back again, out of the top three. The competition is not to be sneezed at!

I feel a sense of invigoration–I hope it’s more than merely momentary. I need to get out there and get more people in. Get friends to get their friends involved. MAKE IT HAPPEN.

IFcomp 2016: Eight characters, a number, and a happy ending

Posted on November 13, 2016 by Christopher Huang

Last on my IFcomp playlist is “Eight characters, a number, and a happy ending”. And that’s it! I might have to go back and change a couple of breakfast orders (just did it for “500 Apocalypses” and “Inside the Facility”) after having digested them some more, but that’s all 58 IFcomp games done this year. And what’s this last one?

END_OF_DOCUMENT_TOKEN_TO_BE_REPLACED

Posted on November 12, 2016 by Christopher Huang

“The Skull Embroidery” is a homebrewed text RPG, and the next thing on my list. One more game to go after this, and that will be the whole comp this year!

END_OF_DOCUMENT_TOKEN_TO_BE_REPLACED

Posted on November 12, 2016 by Christopher Huang

“Tentaculon”. We are a squid.

END_OF_DOCUMENT_TOKEN_TO_BE_REPLACED

Posted on November 11, 2016 by Christopher Huang

“Cinnamon Tea” is a short Twine game about a dream we have after drinking cinnamon tea, and this is a short review.

END_OF_DOCUMENT_TOKEN_TO_BE_REPLACED

Posted on November 11, 2016 by Christopher Huang

“Steam and Sacrilege” is next. Steampunk seems to be the order of the day, if the title is any indication. I wonder what the “sacrilege” part refers to.

END_OF_DOCUMENT_TOKEN_TO_BE_REPLACED

Posted on November 10, 2016 by Christopher Huang

“A Time of Tungsten” is next on my IFcomp playlist. It’s been a really large crop this year, but there aren’t very many more.

END_OF_DOCUMENT_TOKEN_TO_BE_REPLACED

Posted on November 10, 2016 by Christopher Huang

Next: “Labyrinth of Loci”